This is just a small sampling of some of the media coverage that followed Gröning’s trial. Many more articles can be found online. 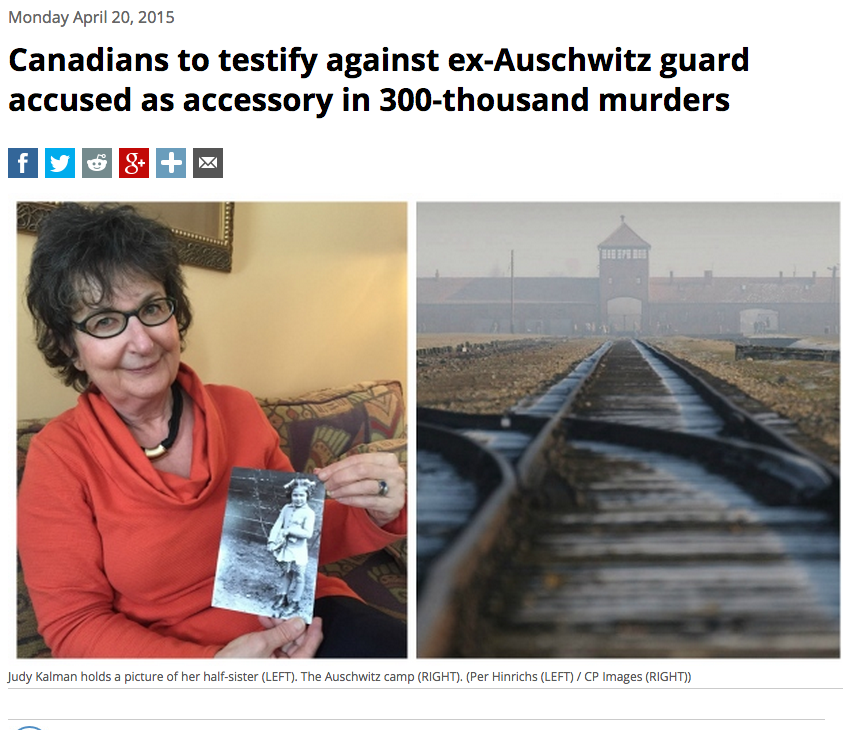 Canadians to testify against ex-Auschwitz guard accused as accessory in 300-thousand murders, presented by As It Happens, CBC, April 20, 2015

Excerpt: Évike arrived at Auschwitz in a cattle car along with 33 family members. “She stepped off the train onto the platform, she was set aside, they were immediately taken to the gas chambers and gassed,” Kalman says. … Read the CBC As It Happens article as a PDF, archived May 1, 2015 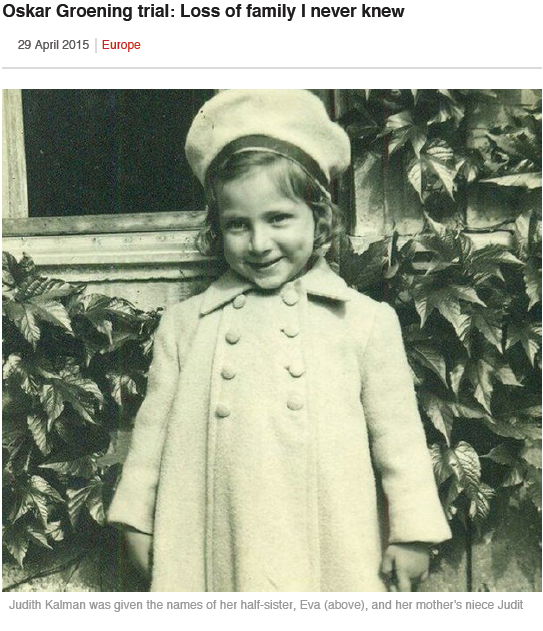 Excerpt: The loss of my parents’ loved ones, in particular the six-year-old half-sister Eva Edit I never knew, left me with a burden of inherited survivor guilt that has been a defining feature of my life. … Read the BBC article as a PDF, archived May 2, 2015 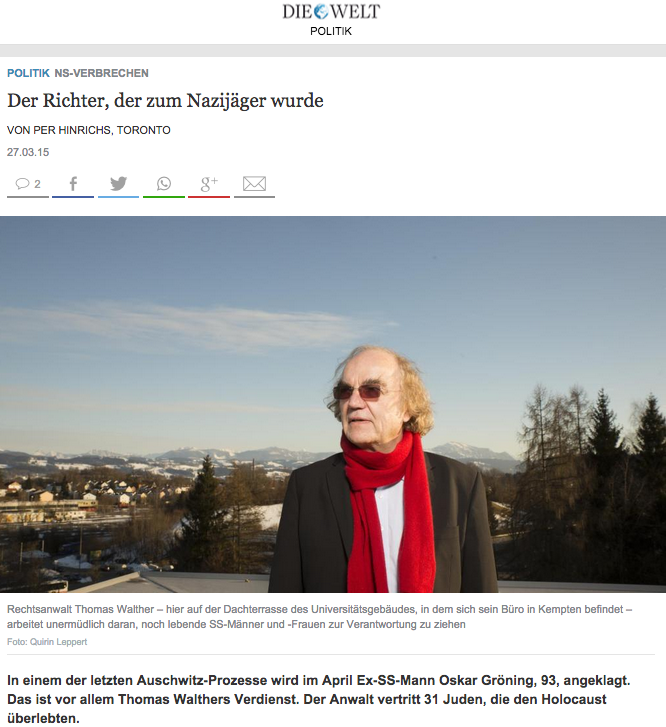 Read the Die Welt article as a PDF, in the original German archived May 1, 2015 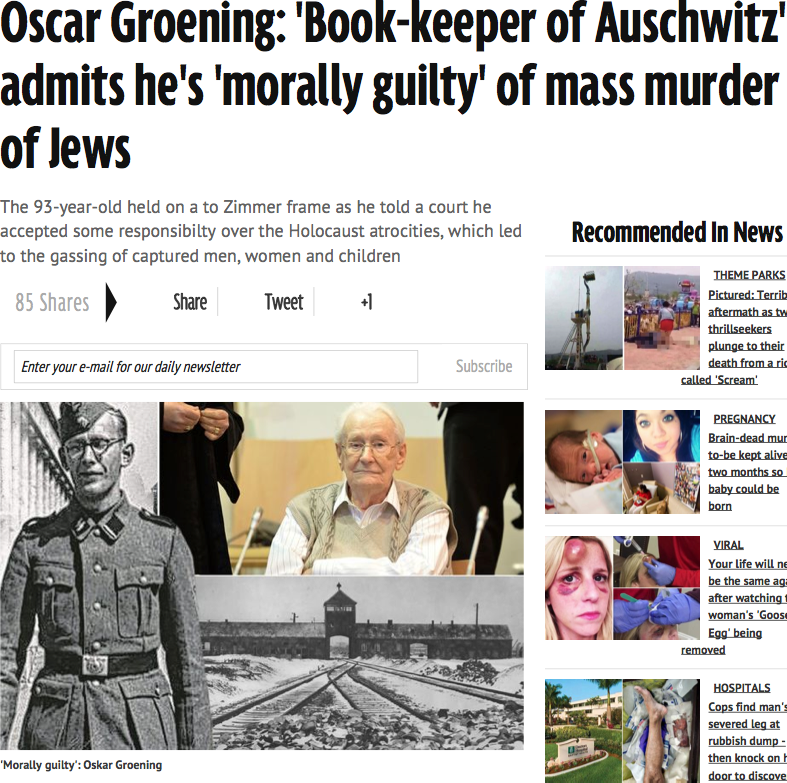 Excerpt: “Judith Kalman, 61, from Toronto, there to represent her six-year-old sister gassed at Auschwitz, said: “I don’t feel resentment or hatred when I think of Groening. I believe him when he says he never laid a hand on a Jew. He is unsure himself of his guilt. He wants to have peace of mind. But he knows there can be no justification.” … Read the Mirror UK article as a PDF, archived May 2, 2015.

Excerpt: Eva Judith Kalman, 61, also came from Toronto to face Groening. … “It’s my understanding that Groening was on guard at the point that my relatives arrived,” she said. … “I’m here because it’s important to speak on behalf of my murdered sister, to speak on behalf of all my murdered family members,” she said. “There are some who say this trial is too little, too late. I say better late than never.”…  Read the McClatchy article as a PDF, archived May 2, 2015 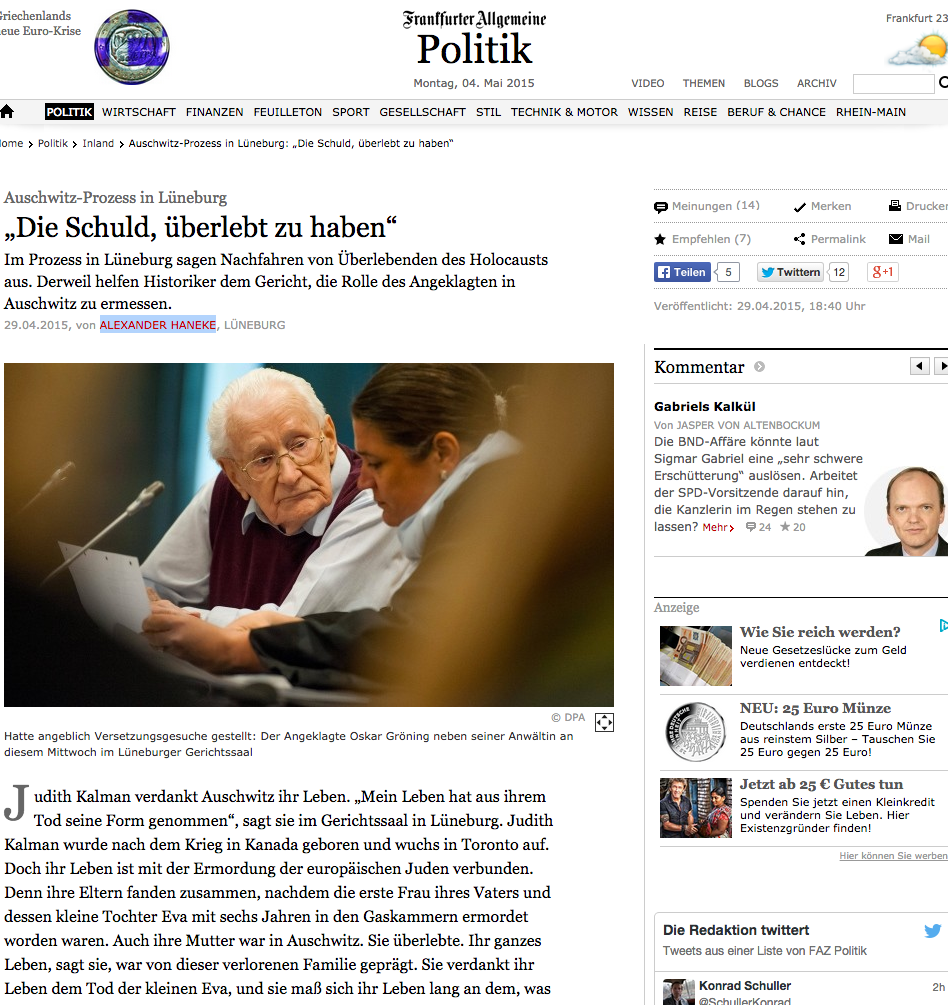 Read the FAZ article as a PDF, in the original German archived May 4, 2015